The Price Of Impatience 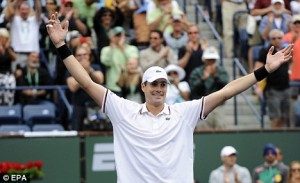 Last week the world got a lesson on how “patience prevails” – if they were watching.

In Indian Wells, California, at the BNP Parabis Open, a kid from North Carolina, who, at 6’9″ could just as easily be a winner on the basketball court as the tennis court flexed not only his athletic muscles but his patience muscles and won big time.

John Isner upset the world’s number one player, Novak Djokovic (who had a perfect grand slam record last year!) and advanced to the finals in a top championship,launching himself into the top 10 for the first time.

While John beating Novak was exciting, I thought the real interesting story was in the match he had before, the one between him and Gil Simon. Gil Simon is not a seeded player but he is one of the most frustrating for many of top tennis players in the game today. Gil’s strategy? Return every ball, don’t go for flashy winners, and keep his opponents having to play the next ball in the rally.

In essence, he wears his opponents down. He’s got an infinite amount of patience.

The opponent Gil faced right before John Isner was the up and coming young American superstar, Ryan Harrison. Ryan is immensely talented and equally fiery and temperamental. Ryan was so close to beating Gil but lost the match because he lost patience. He wanted to ‘finish each point already’, and Gil forced him into errors that cost him the match.

John Isner, on the other hand, is no stranger to patience. He is already famous for his 11 hour, 3-day marathon tie breaker with Mahut at Wimbledon – which he won. How many people could have withstood even an hour tie-breaker, much less a 3-day one?

So at Indian Wells, John out-patienced Gil Simon, won that match and went on to beat Novak Djokovic, catapulting him into his first finals match at a major tournament.

“Patience is a virtue”. We’ve heard it since childhood but take a look at what we actually expect now: instantaneous replies by email, buy with one click, and expecting immediate results in business or we deem that effort a failure.

I’m taking a lesson from John Isner’s playbook. I don’t have to be 6’9″ to get that the payoff is available for those who build the patience muscle.